I was recently referred a patient who started to complain of a purple spot in the vision of the right eye.  The patient is 74 years old and had just received an injection of Botox and some dermal fillers for treatment of facial wrinkles. 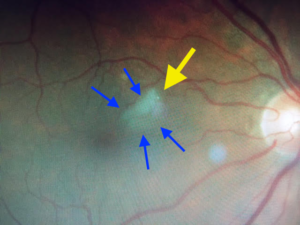 This is a picture of the retina of the right eye of my patient.  The yellow arrow shows a bright white speck of cholesterol which is blocking a very tiny retinal artery.  The blue arrows highlight the retinal edema, or swelling, caused by the blockage.

Click on the image to get a larger view.

Hollenhorst plaques are characteristic of artery occlusions and can be clearly seen to cause a blockage.

A fluorescein angiogram is a diagnostic test requiring injection of a vegetable based dye into the bloodstream.  The dye travels to the retina and becomes visible when using a special filter.  This is a great way to visualize blood flow.  The two pictures nicely demonstrate “with” dye and “without.”  The dye appears white and represents the blood flow. 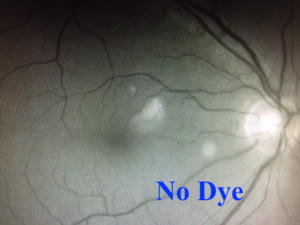 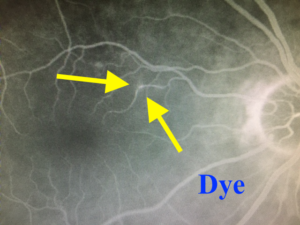 The patient might have had a stroke had the plaque traveled to the brain.  In cases of artery occlusions, it is important to assess the patient’s risk of developing a stroke.  This requires team approach with the patient’s family doctor and possibly cardiologist. 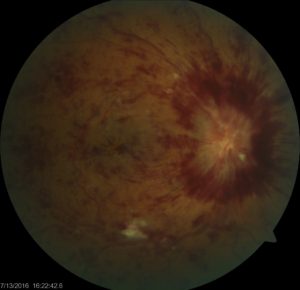 Retinal vascular occlusions (RVO) are a group of disorders interrupting the normal blood flow of the retina.  There are two types of blood vessels which may become occluded, or stopped.  Both retinal veins and arteries are affected.

A central retinal vein occlusion is depicted in the featured image.

There are two types of retinal vein occlusions;

The visual prognosis is better for the BRVO compared to the CRVO.

There are two types of retinal artery occlusions;

As with vein occlusions, the distinction between BRAO and CRAO is the amount of retinal tissue involved.  Artery occlusions generally have a worse prognosis compared to vein occlusions.  In addition, an artery occlusion may be a sign of more serious cardiovascular/systemic disease.

Symptoms and Diagnosis of RVO

All types of occlusions share the same symptoms.  The most common symptoms of retinal vascular occlusions (RVO) are sudden, painless loss of vision.  It happens very quickly.

The best way to diagnose the type of retinal vascular occlusion is to see your eye doctor or retina specialist for a complete dilated eye exam.  Additional testing including digital fundus photography, optical coherence tomography (OCT) and fluorescein angiography may be necessary.

Generally speaking, vein occlusions (both BRVO and CRVO) are caused by hardening of the arteries.  Though these are soft veins, retinal veins and arteries cross over one another.  At these intersections, the harder artery can press against the softer vein causing closure.

Artery occlusions are quite different.  Usually a piece of cholesterol plaque can break off, usually from the carotid arteries of your neck, travel to the retina and plug a retinal artery. 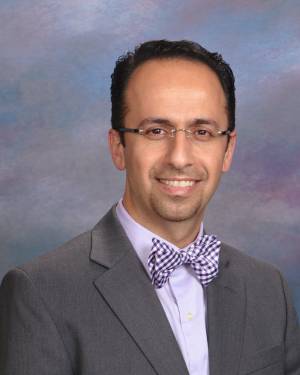 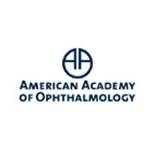